We need to talk about Seasons Past. 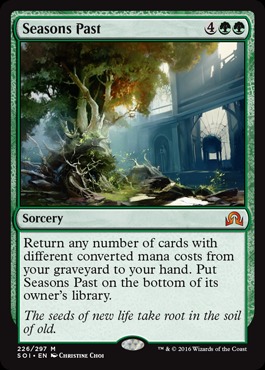 Seasons Past is a seriously messed up Magic card. It’s not necessarily broken, but it’s dangerously close in the right deck. As we saw at Pro Tour Shadows Over Innistrad, the ability to repeatedly loop it to get the best cards in your deck into your hand over and over again leads to inevitability that we haven’t seen in Standard in a long time. The versatility — need a kill spell? Discard? Life? A threat? Here, have all of them — might even push it ahead of Sphinx’s Revelation in the category of “Cards you do not want to see your opponents cast.” Oh, and then you can do it all again, because it goes back into your deck.

But the key is finding the right deck, because Seasons Past is not a card you can throw into any deck that can produce green mana. The B/G deck from the Pro Tour was certainly strong, but — at least in my experience — had trouble closing games. So I’ve been tinkering with different versions for a while, then this happened:

I was headed this direction myself, but Erin got there first. I wouldn’t be surprised if she did so by coming to the same realization that I did: Seasons Past is tailor-made for Abzan. I sleeved it up, tweaked it a little, and pretty much destroyed a PPTQ with it the first time I actually played it.

To understand why Seasons Past is so good in Abzan, it helps to break down what Abzan decks do. Let’s do that. Understatement alert: Languish is pretty good right now. Unless you’re expecting to run into a lot of ramp, it will kill just about everything you need to kill, and usually wipes out an awful lot of your opponent’s work. Ruinous Path isn’t the Hero’s Downfall that we deserve, but it’s close enough in this format. If killing your opponent’s only threat and then beating for four is wrong, I don’t want to be right. Grasp of Darkness and Ultimate Price both have a pretty impressive number of valid targets, and Anguished Unmaking is a nice catch-all removal spell, even if you do have to pay three life.

The one change I would make to the removal package is swapping out an Ultimate Price for a Death Wind. Death Wind scales up to kill Ormendahl — or even Ulamog — in the late game, it hits things that Price doesn’t, it kills indestructible creatures/planeswalkers and it gives you another option for a one-drop to return with Seasons Past.

Step 2: If you can’t kill it, make it disappear before it hurts you Neither of these cards is Thoughtseize, but they get the job done in a planeswalker-heavy format. Duress can also be a lifesaver against Collected Company decks, while the exile clause on Transgress puts in serious work in certain matchups. In a reactionary deck such as this, the information on what your opponent has in hand is also useful to plan out how you’re going to sequence your removal to not get blown out by an Avacyn or something.

Step 3: Gain a bunch of life so you can keep on killin’ Sorin could go in a number of categories, but he goes here because he often comes down and immediately pulls you out of the danger zone. Being able to kill something with five toughness, gain five life and still have a planeswalker to tick up the next turn is insane. Being able to kill multiple creatures/planeswalkers across multiple turns is even more insane. The point here is that Sorin is insane.

I don’t need to tell you how good Kalitas is, but I will. He’s much like Olivia Voldaren in that he’s a four drop who is really a six drop, but sometimes you have to drop him early, let him eat some damage, then get him back later. When you start adding zombies to the board, he can close the game very quickly. His only downside is Reflector Mage, and that’s because Reflector Mage is dumb.

Nissa’s Renewal can be completely backbreaking against aggro; not only is the seven life huge, but the extra mana often sets you up to start chaining things on the next turn. Shambling Vent is great in this deck because you can afford to be more aggressive in blocking/attacking with it. It has a CMC of zero, which makes it a valid target for Seasons Past. Nissa can help you hit your fourth land drop or turn into a serious threat later. A 2-2 split on Painful Truths and Read the Bones works well because sometimes you just need raw card advantage and sometimes you need to dig for something specific. Also, you can cast Read the Bones off of Dark Petition and still get the full benefit. Protip: Do not cast Painful Truths off Dark Petition.

Infinite Obliteration is a great silver bullet against ramp, as well as being useful in other matchups. I used it to get rid of a Zurgo Bellstriker that was dashing in back-to-back games, then later blind-called Avacyn on turn 3 against a B/W opponent. It worked.

Dark Petition just does everything. Spell mastery is pretty easy to achieve in this deck, which means you get to play Demonic Tutor. It provides an insane amount of flexibility, which is another hallmark of Abzan decks.

Again: Seasons Past is just ridiculous. In previous versions of Abzan, this role would be filled by Den Protector, but Seasons Past is so far beyond what Den Protector can do that it’s almost scary. Being able to return Duress-Grasp of Darkness-Ruinous Path-Kalitas-Dark Petition-Sorin isn’t even that hard to do, and you usually have multiple options for each spot on the chain. This deck demands that you turn the game into a grind, and if you successfully do so, then Seasons Past is pretty close to unbeatable.

Step 6: Have a hateful sideboard

Because of Dark Petition and Seasons Past, your sideboard is likely to be much more effective than your opponent’s. Being able to tutor and cast a Flaying Tendrils or Virulent Plague against aggro/tokens decks can effectively win you the game on the spot.

Mind Rot is good against ramp and control, as is Gaea’s Revenge. Hallowed Moonlight is good against multiple decks right now, and its worst case is paying two mana to draw a card at instant speed. Linvala is crazy good against aggro decks.

As for actually sideboarding, it’s pretty self-explanatory, but don’t be afraid to side out one Seasons Past against decks that don’t run Transgress the Mind. Usually, I cut Painful Truths and Read the Bones against aggro to go up on removal and bring in Linvala. Against control and ramp, you can cut removal for Mind Rot, Gaea’s Revenge and Infinite Obliteration. Basically, take out the bad cards, put in the good cards. It’s easier to do than you think.

It is not likely that I broke the format, but this deck certainly feels like it has game against just about everything. Seasons Past adds a resiliency and inevitability to the deck that other decks just can’t match, and Dark Petition allows for an incredible amount of flexibility depending on what you need at that exact moment.

Adding white shores up problematic areas, and it allows you to add two very good win conditions in Sorin and Shambling Vent. Both also gain life, which strengthens what was already a pretty good anti-aggro plan.

“Unfortunately,” I won’t get to play it in any more PPTQs this season, but I’ll certainly be using it as my weapon of choice for Standard events until the next rotation. Powerful, flexible and redundant is a hallmark of the recent Abzan decks we’ve seen, and this certainly fits the bill.

Now, if only Siege Rhino was still legal …

Casey Laughman is editor of NerdRageGaming.com. Contact him at claughman@gmail.com.