Hello True Believers and welcome to an article about my favorite format, Legacy.

I really wanted to start this article with how excited I am to play Legacy and how I am going to be playing my old standby, Stoneblade. If I did that I would be lying to you and I was once taught the harsh lesson that “I must not tell lies.” Just to clarify, I am excited to play Legacy. In fact, I am very excited to play Legacy. However, I’m not sure what I will play. I haven’t felt this torn since my dear friend Sensei’s Divining Top was taken from me. The reason I have been thrown into such a crisis is one card, Deathrite Shaman. This little annoying…elf… does everything! It makes mana, gains life, and kills you. It allows decks with greedy manabases to function almost effortlessly.

It’s time to face facts. This is Deathrite Shaman’s world and we are just living in it.

Here are the two biggest offenders:

(A quick aside, props to a Nerd Rage CT regular Daniel Duan for winning the SCG Cincinnati Legacy Classic with this very deck.)

This is the Deathrite Shaman deck for people who don’t want to play Delver of Secrets. It’s the king of fair decks.

What about 4 Color Delver? Deathrite makes this splash essentially free, even encourages it.

(Another quick aside, congratulations to Joe Bernal, Matt Hoey, and Andrew Tenjum for winning the Cincinnati team open.)

This deck plays some of the most efficient cards in Legacy, is consistent, and rewards tight play. If Delver of Secrets can convert avid Stoneblade enthusiast Joe Bernal, then what hope do the rest of us have?

If you’ve never gotten a chance to sleeve up a Delver deck then I would really suggest it. It’s a very powerful deck and insanely consistent. If you were wondering why all the lists look the same that’s because it’s almost perfect.

Have no fear my dear readers. I will not succumb to the temptations of the Insectile Aberration!

So how can we fight this menace?

Delver decks take advantage of the pressure they put the opponent under by playing Daze. They create situations where your mana and life totals are pressured. Then when you try to tap out to stop their threat, they pick up a land and Daze you, slamming the door on the game.

This is how Delver players can win a game that they might not have if you simply waited a turn.

Now back to our regularly scheduled article.

Chalice of the Void

One of the Delver deck’s biggest strengths is that it gets to play a low land count and a high number of cantrips. If they cannot dig through their deck then it gets much more difficult for them to find one of their 15 threats. Not to mention 8 of those threats get bricked by Chalice on 1.

An early Chalice can be difficult for Delver decks to fight through. Normally it requires them to find a Young Pyromancer, which allows their “dead” cards to make a 1/1, or a Gurmag Angler after stocking up their graveyard.

Eldrazi is one of the best Chalice decks in Legacy. It also has extremely efficient threats that disrupt the opponent.

Thalia, Guardian of Thraben (and other taxing effects)

Delver relies on cheap cantrips to dig through their deck. If you make those more expensive it slows them down and forces them to pay a fairer rate for their spells.  If you make a deck with 19 lands, only 10 of which actually make mana, having to pay 2 mana for a Ponder makes life very difficult for you.

Traditional Death and Taxes plays a myriad of things that make life difficult for Delver decks.

Not only do they have Sanctum Prelate to not allow Delver to cast their spells, but they also have Stoneforge Mystic and Batterskull to make a race very difficult from the Delver side.

Wasteland them (a lot)

If Delver cannot cast their spells then it gets very difficult for them to kill you. This next deck does a very good job at disrupting Delver’s mana base.

Lands can not only disrupt Delver’s Mana, but it can kill them without even casting a spell. For a Daze/Force of Will deck, that can be a problem.  Now, Delver does play their own Wastelands, but if they can’t keep a threat on the board you can just kill them at your own pace.

Finally, we take the gloves off.

We have established that if you do not allow the Delver deck to cast their cantrips then they have a hard time winning. We have also established that if we mess with their exclusively non-basic manabase then it gets difficult for them to win. So, why not do both with the same card?

Blood Moon is a very annoying Magic card and punishes anyone who does not see it coming. The difficult thing about it is that if it’s not deployed within the first few turns of the game then it loses a lot of its power. During the reign of Treasure Cruise I played a Jeskai Blade deck with Blood Moon. The real problem with that strategy was that I could not get the Moon into play before turn 3, and at that point many of the Delver decks have gotten a threat or two on the board. However if you can get it in play on the first turn of the game, then that could be lights out for the Delver deck.

Now on the other hand, Back to Basics gains more value with the more lands the Delver player has in play. If they have 3 tapped lands in play and you play Back to Basics, you have just shut off half of their color producing lands.

The funny thing is, people have been playing these strategies and yet Delver still runs the tables at any given Legacy event.  I’m not sure what to do… Do I play Stoneblade and pray to Thor that I can overcome the disadvantage of not playing Deathrite Shaman, or do I break down and register Delver of Secrets?

Ghostly Voice: Alex, do not betray your friends. Be the hero of this event. Crush the Delver menace.

Ghostly Voice: You know me Alex… I have been at your side for a very long time.

Ghostly Voice: What? No, think of the other ghost… 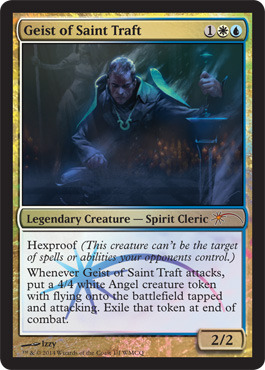 Saint Traft! Hey buddy, you know I haven’t played you in Legacy for a long time… sorry about that.

Traft: I know, but you have fought with my spirit. Do not give up. Fight them on your own terms.

Well, you guys heard the spirit.  Legacy is a format to play what you know.  I have a feeling I will be sleeving up some Stoneforge Mystics next weekend, but who knows?  Anything could happen.

No matter what you decide to play next weekend, just make sure you get in some games against Delver and have a solid plan against it.

Have fun tapping those cards.

Alexander Hamilton is a grinder from Chicago who is well-known for his love of Legacy. However, if there is a competitive event in any format in the Chicagoland area, expect him to be there playing Magic and making terrible puns, and not necessarily in that order.